It seems that most inventions and ideas stem out a necessity of some sort, hence the saying; necessity is the mother of invention.  I needed a notebook that could have a multifunctional tone and still have style and look good. 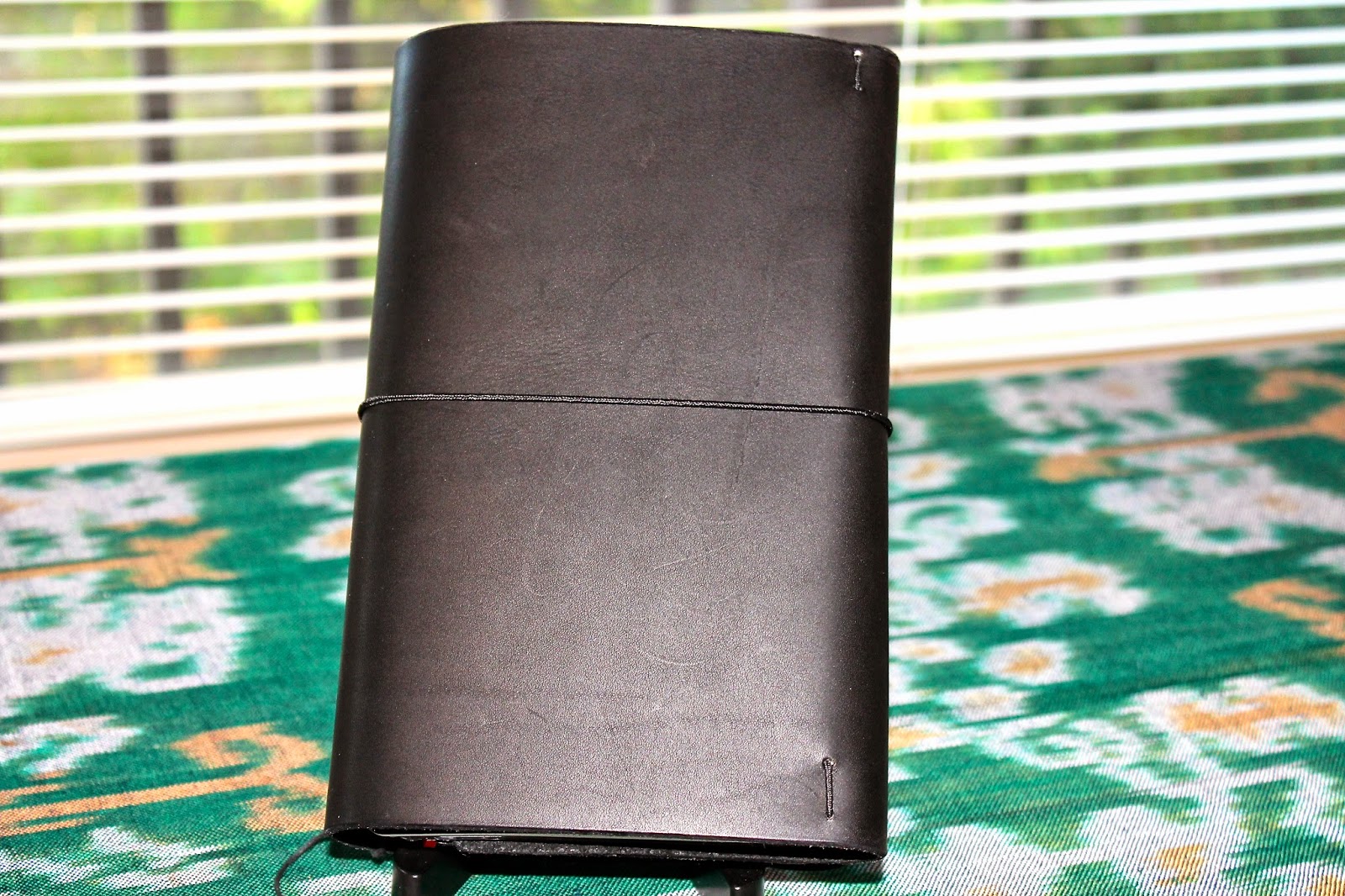 The Quad-Fold XL was thusly born.  You can see by the photo below, it has girth, and can easily hold nine inserts comfortably. 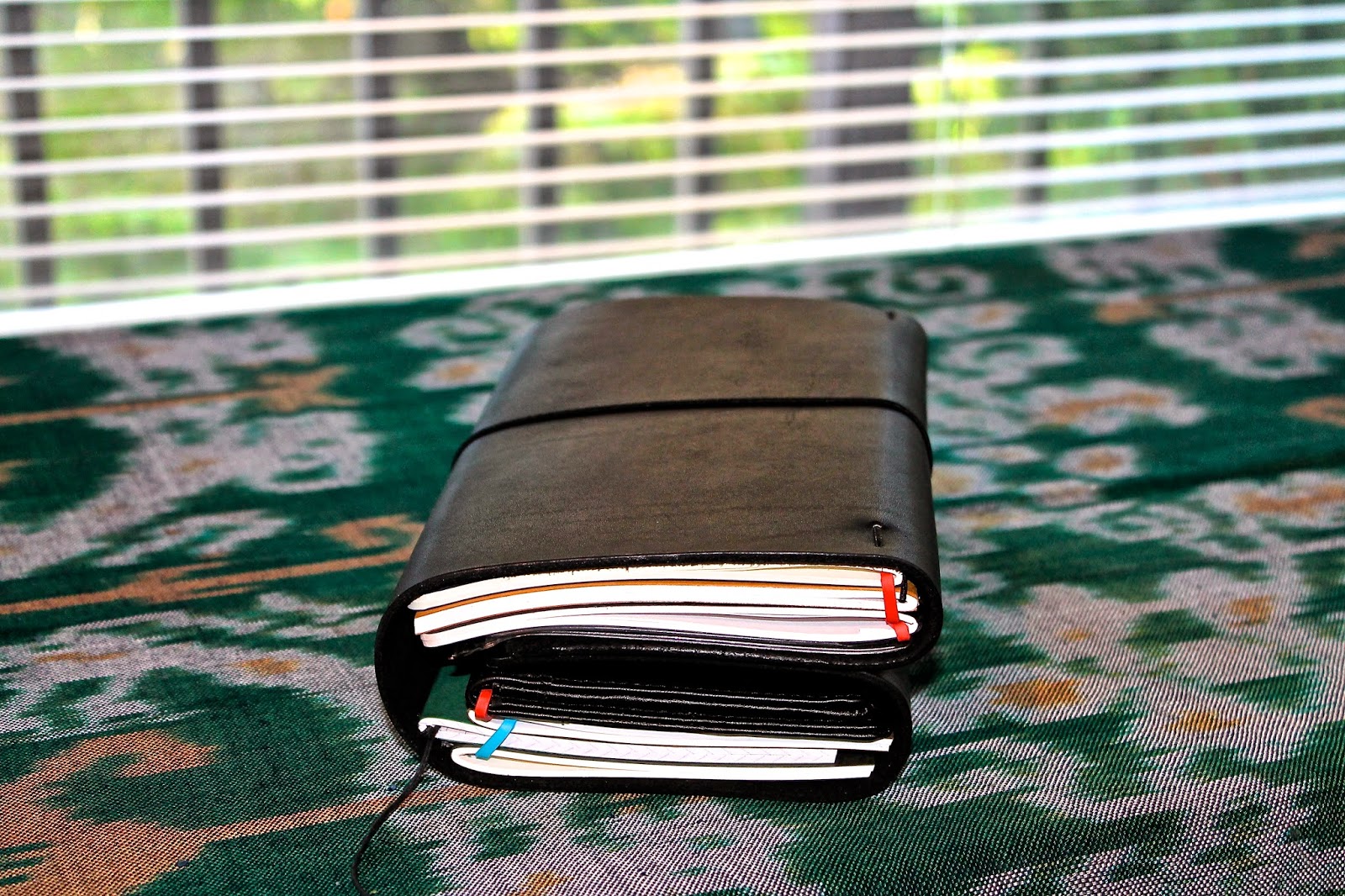 This photo really demonstrates how the system allows you to separate your inserts and organize hem all under one notebook roof. 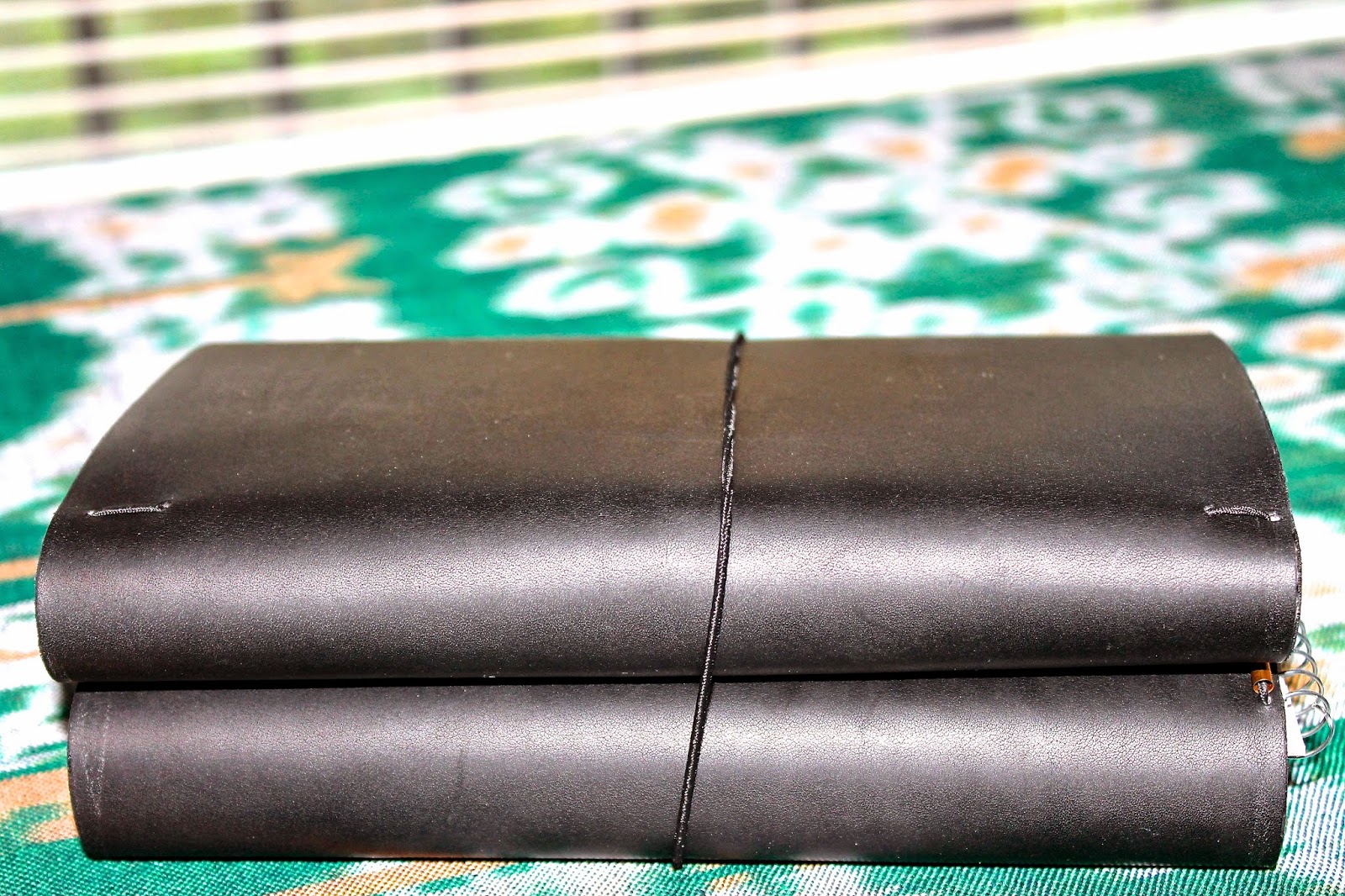 Has that "Bible" look with that thick exterior. 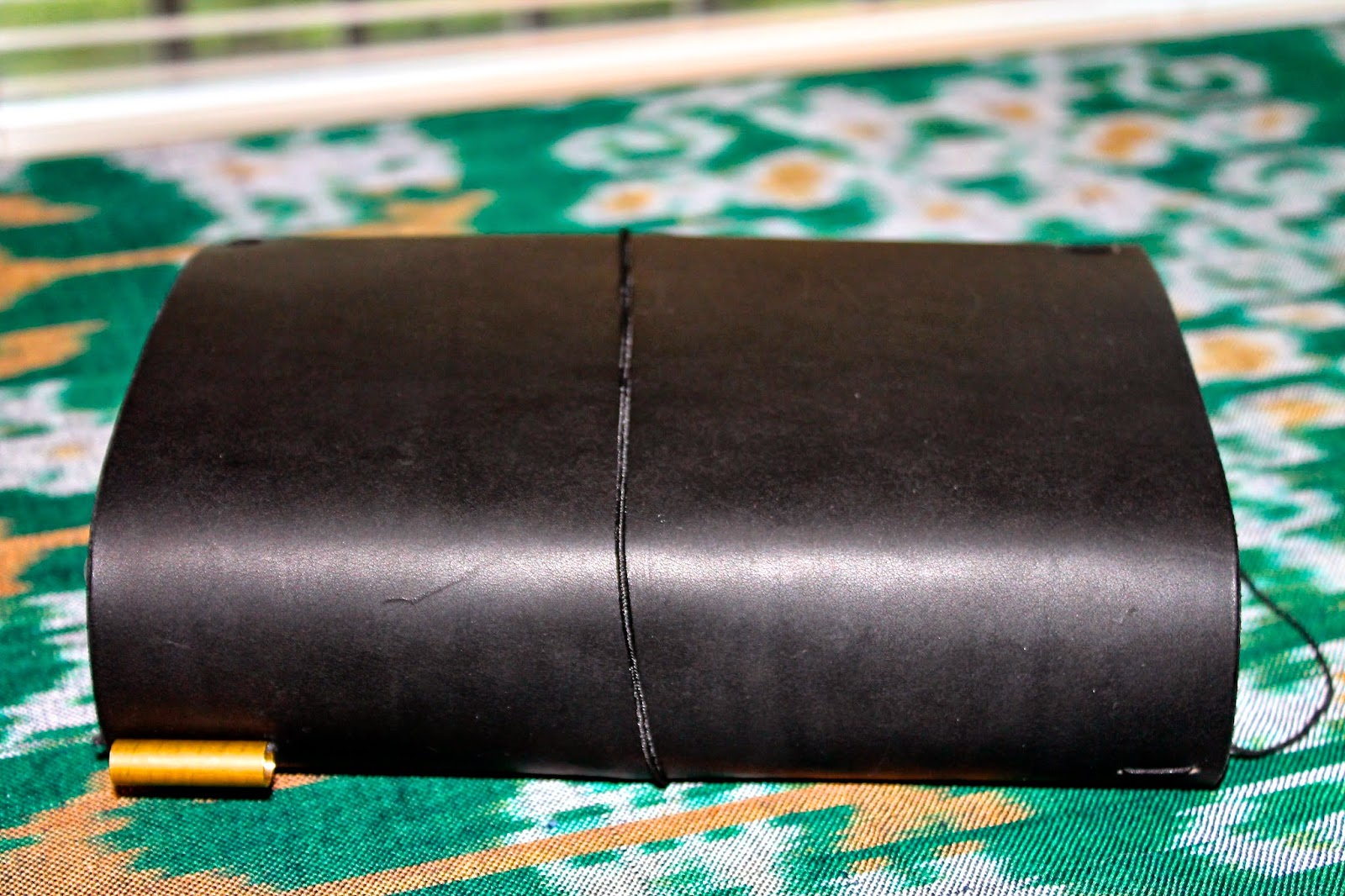 Partially open this photo begins to show how Quad-Fold XL allows you to work on either side independently of the other. 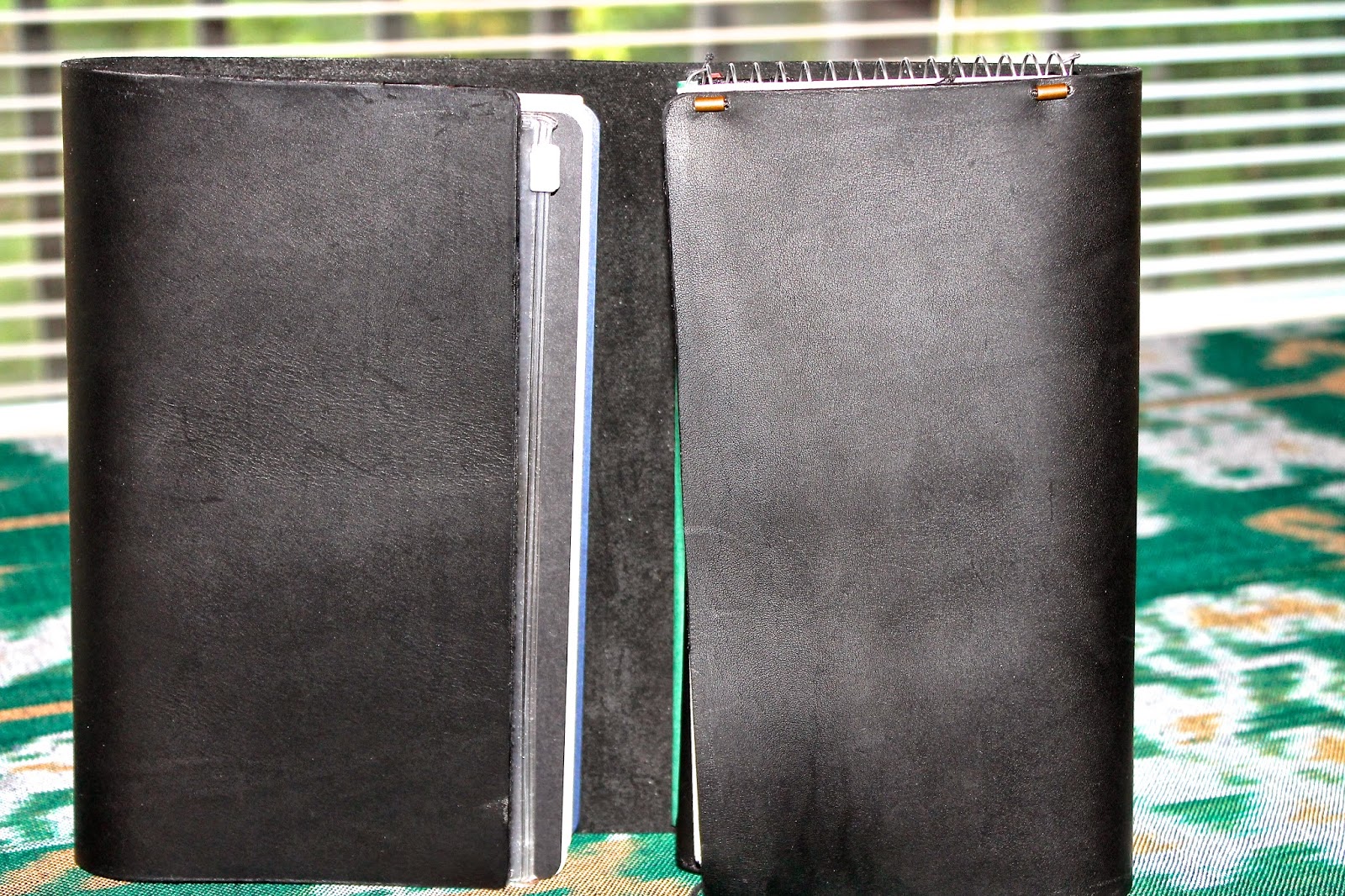 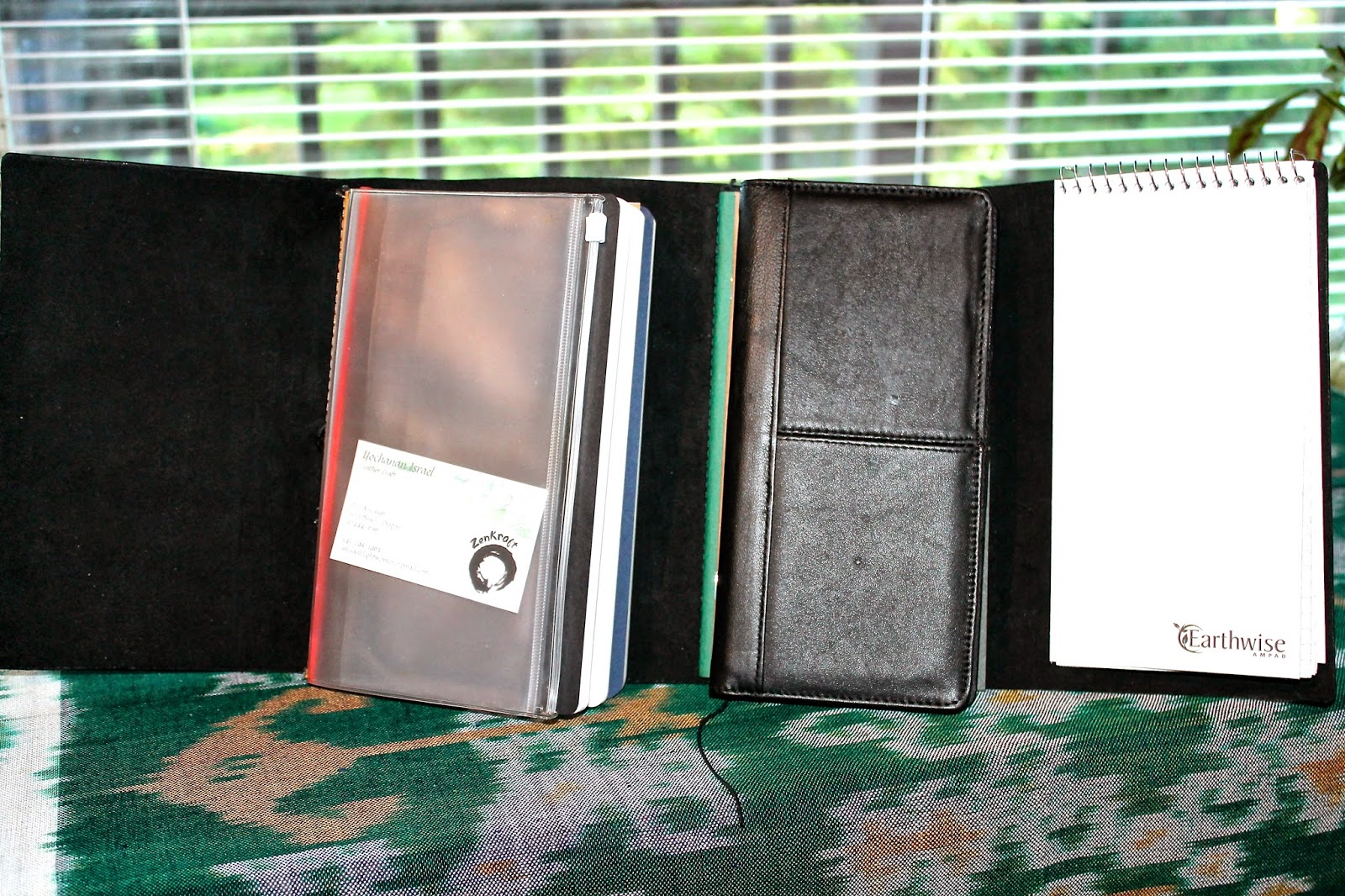 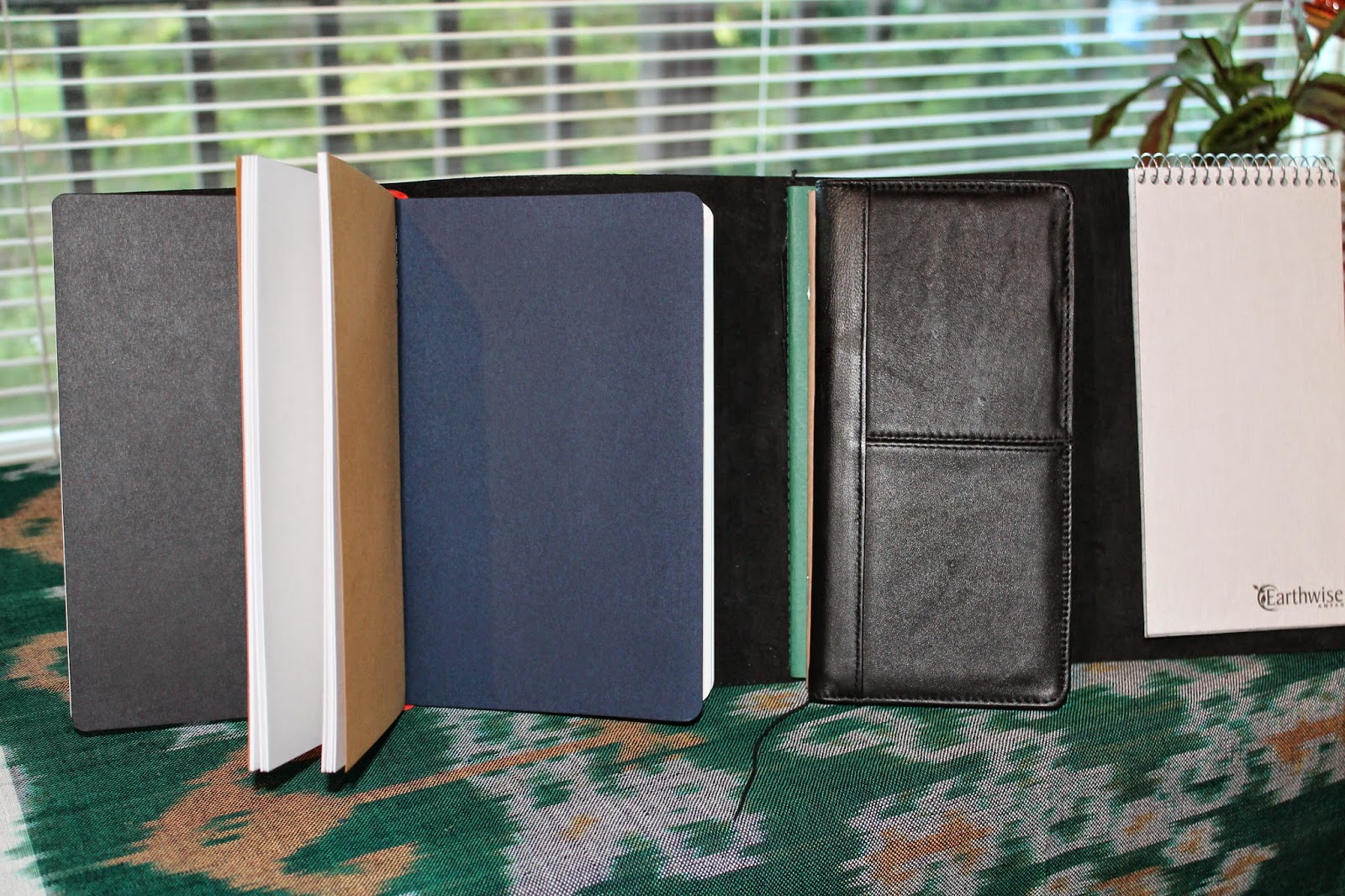 On the left are three A5 inserts, next a passport wallet with three regular inserts, and a flip top insert. 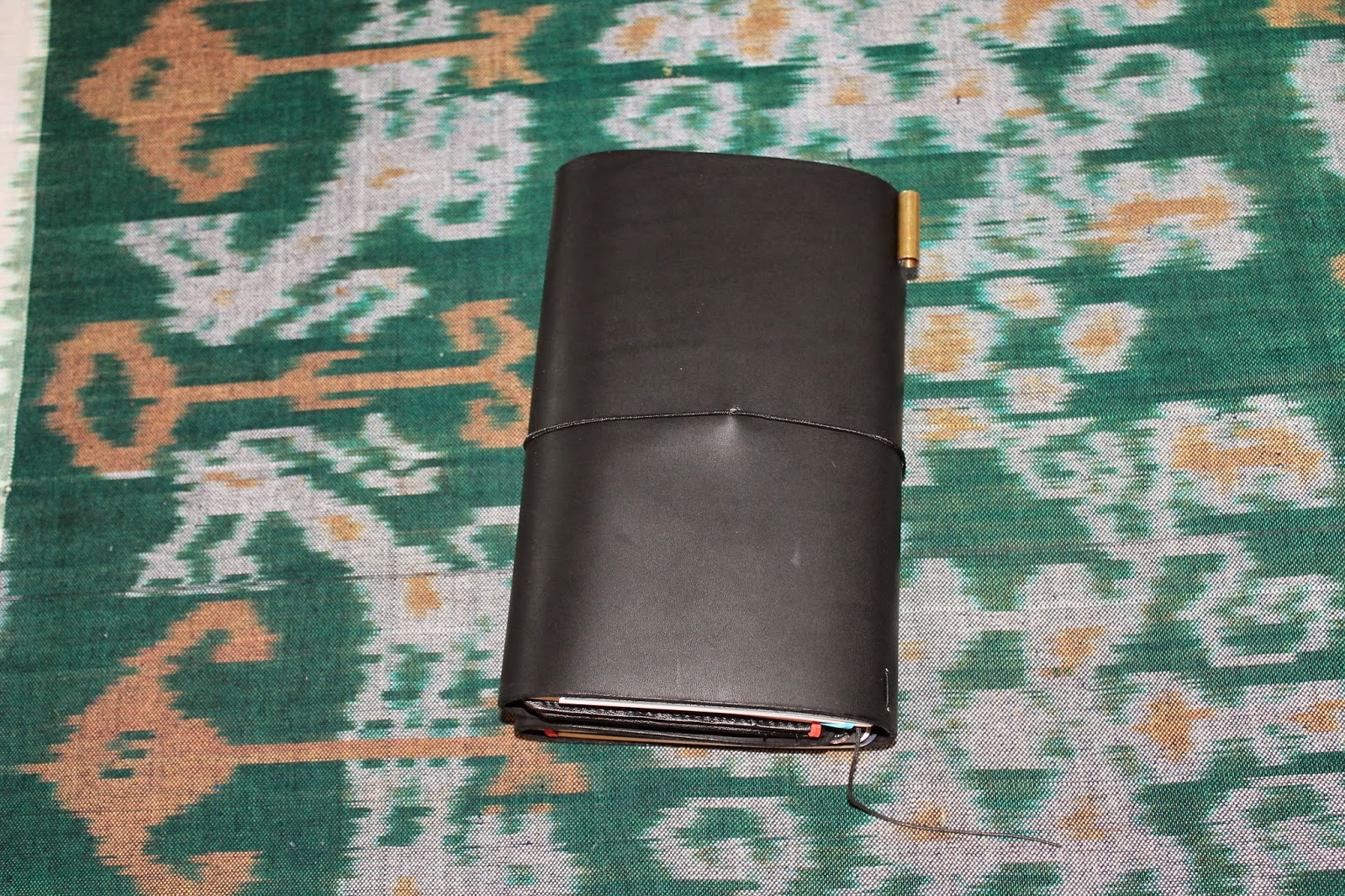 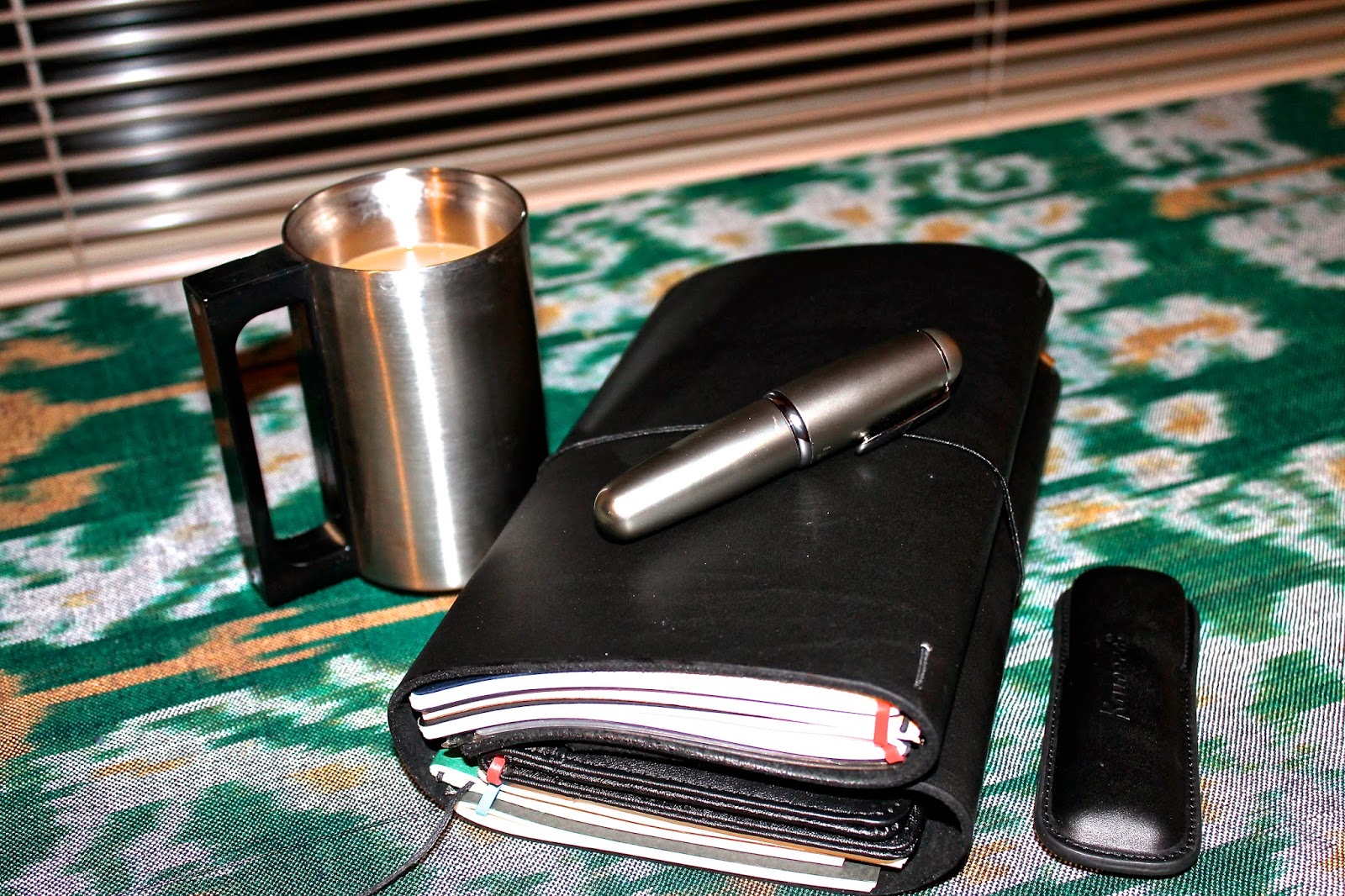 Ready for some writing action!

If you like this notebook, email me and we can discuss making one for you,
Thanks!
Posted by ZenKraft at 9:45 PM No comments: 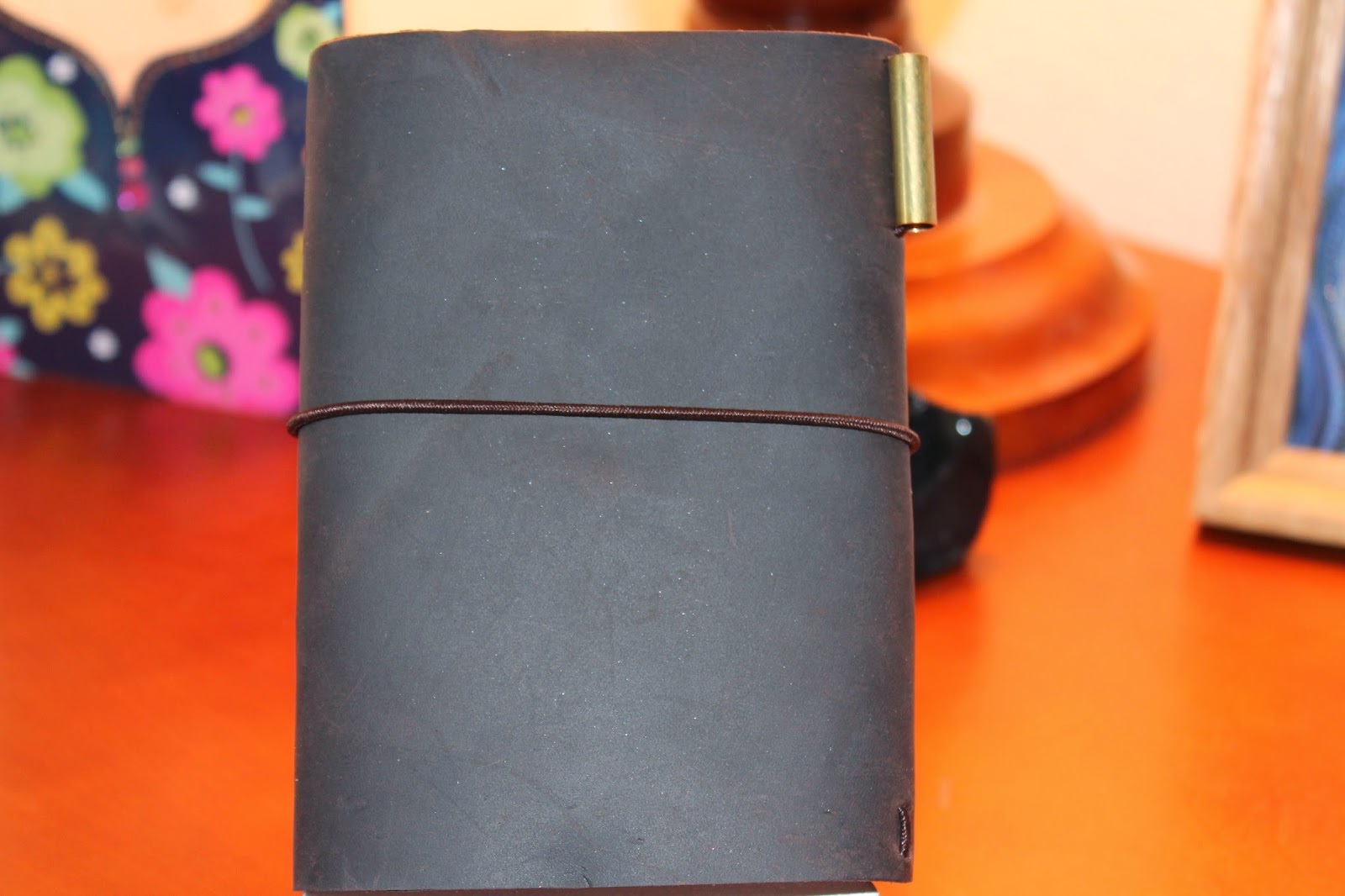 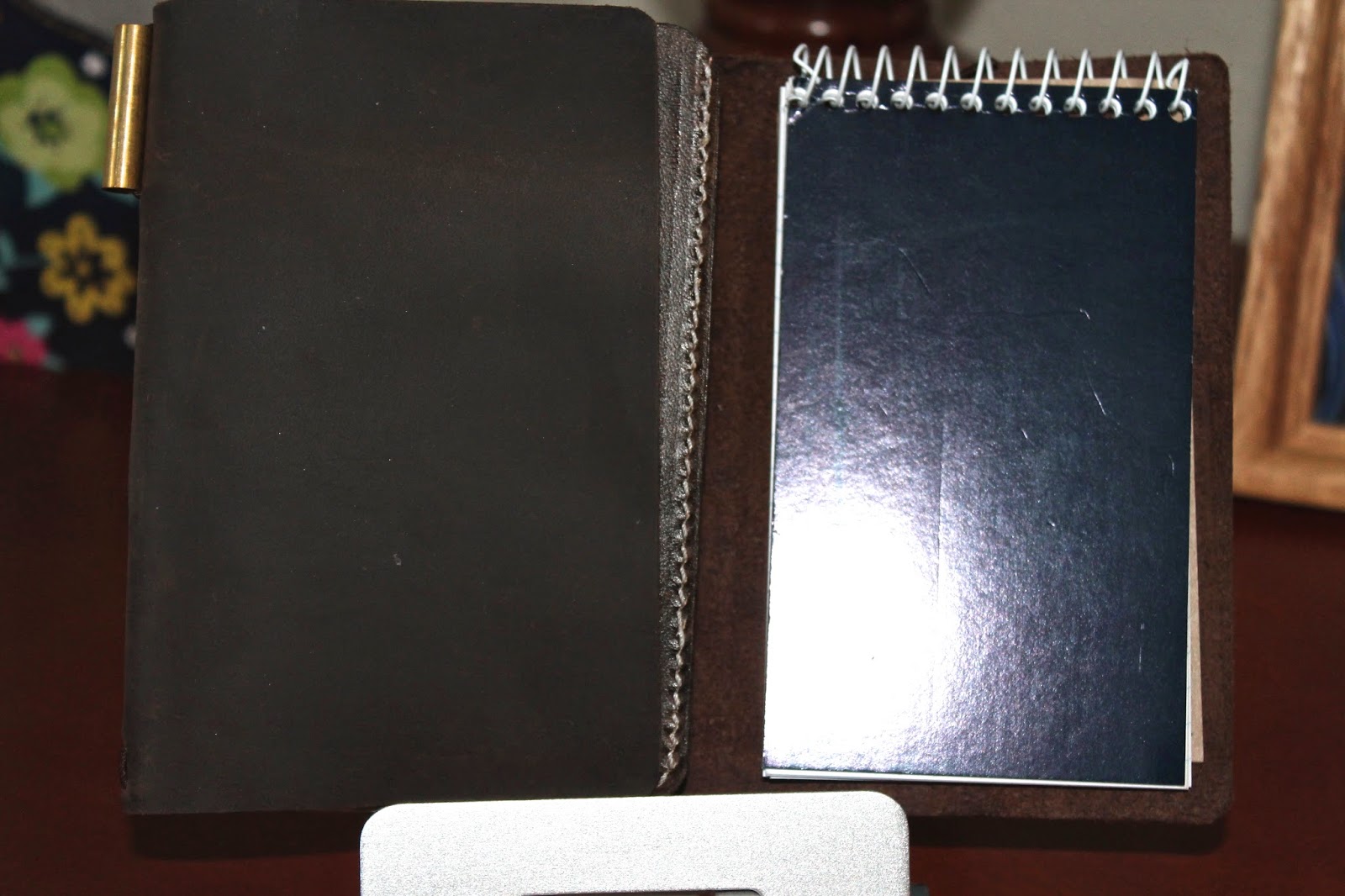 Fully open, showing leather kraft insert by Jason Polaski, Anachronistic, Etsy.  Kraft insert is not for sale.  Jason can make you one however. 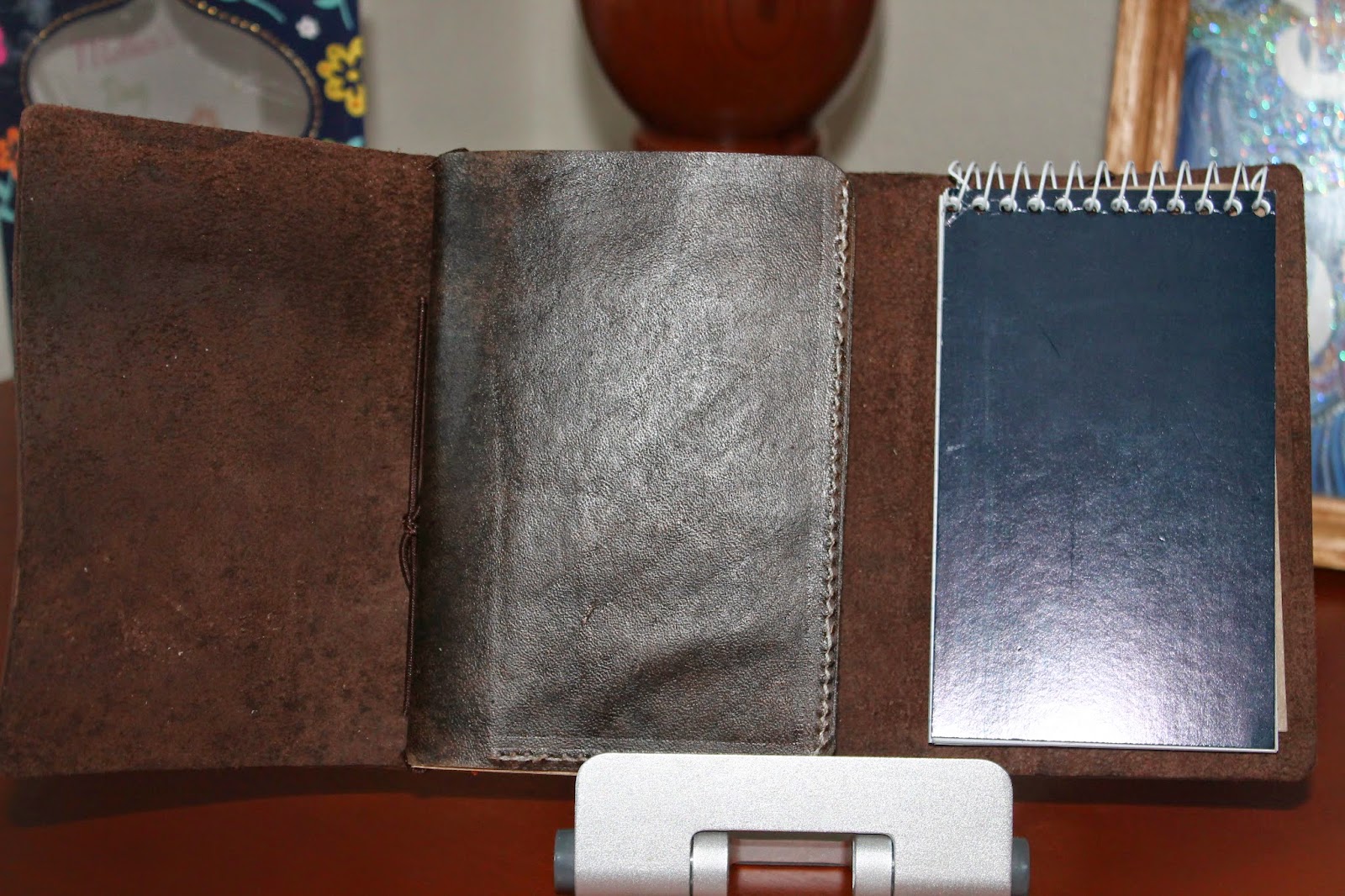 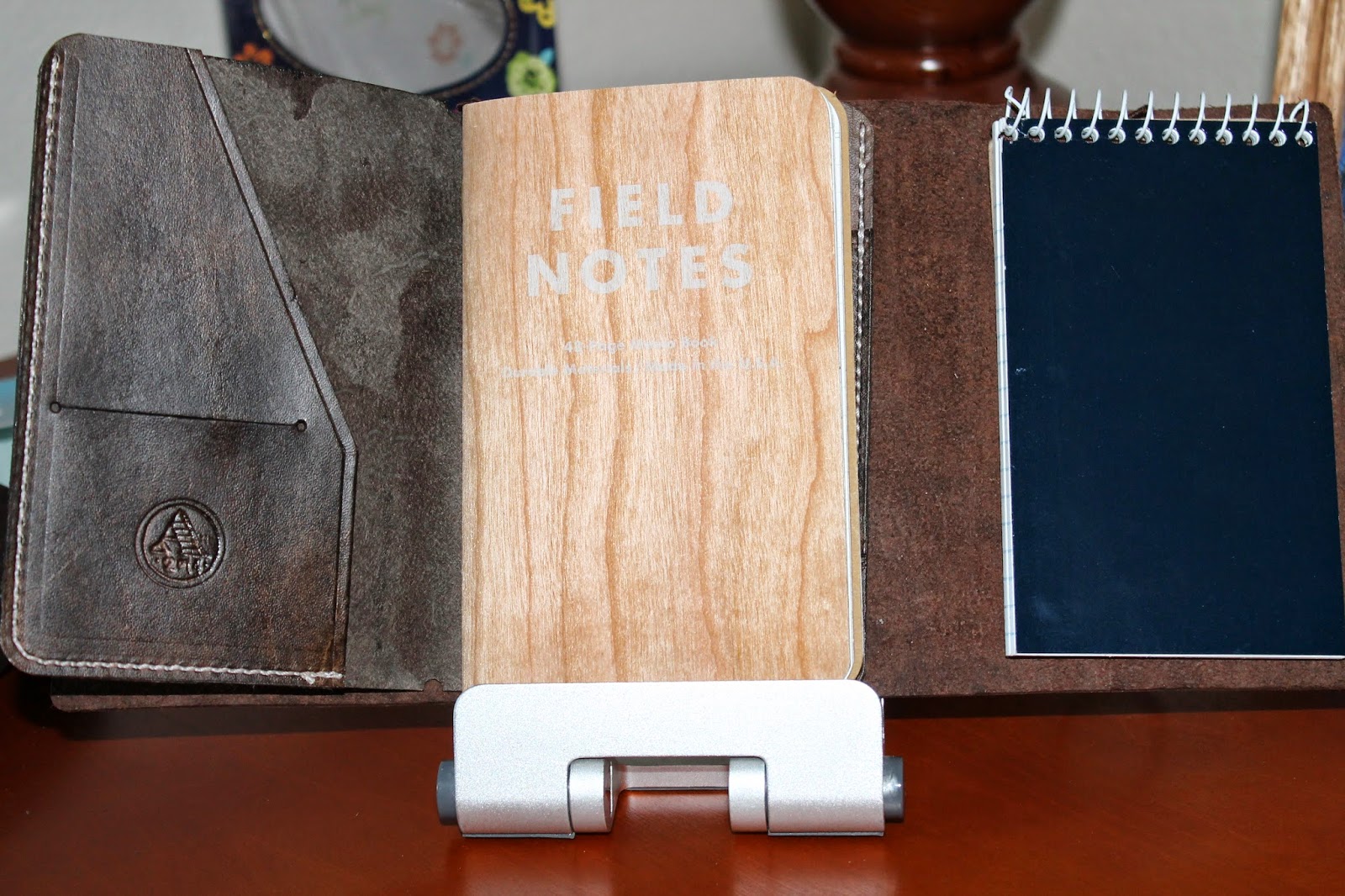 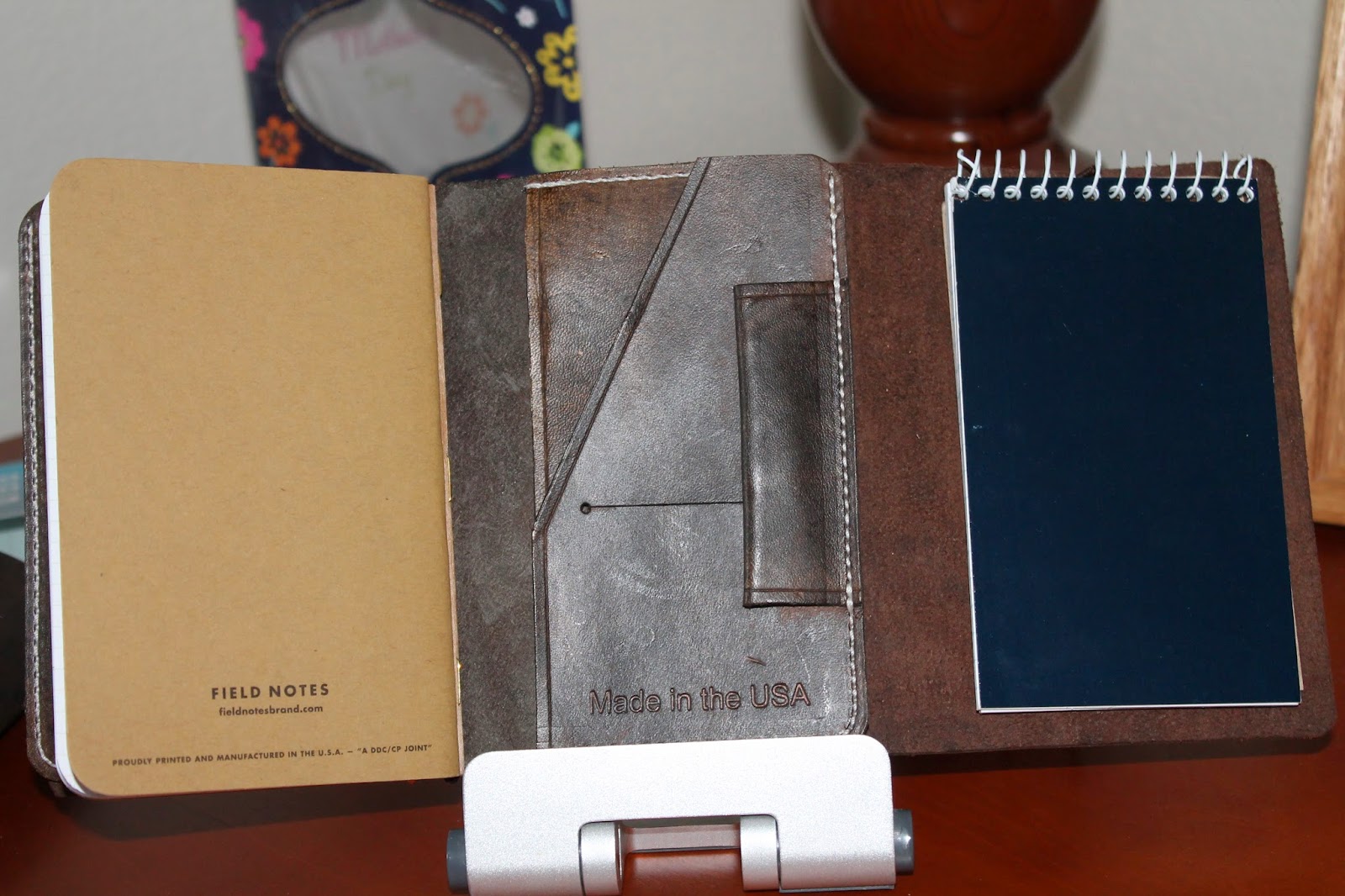 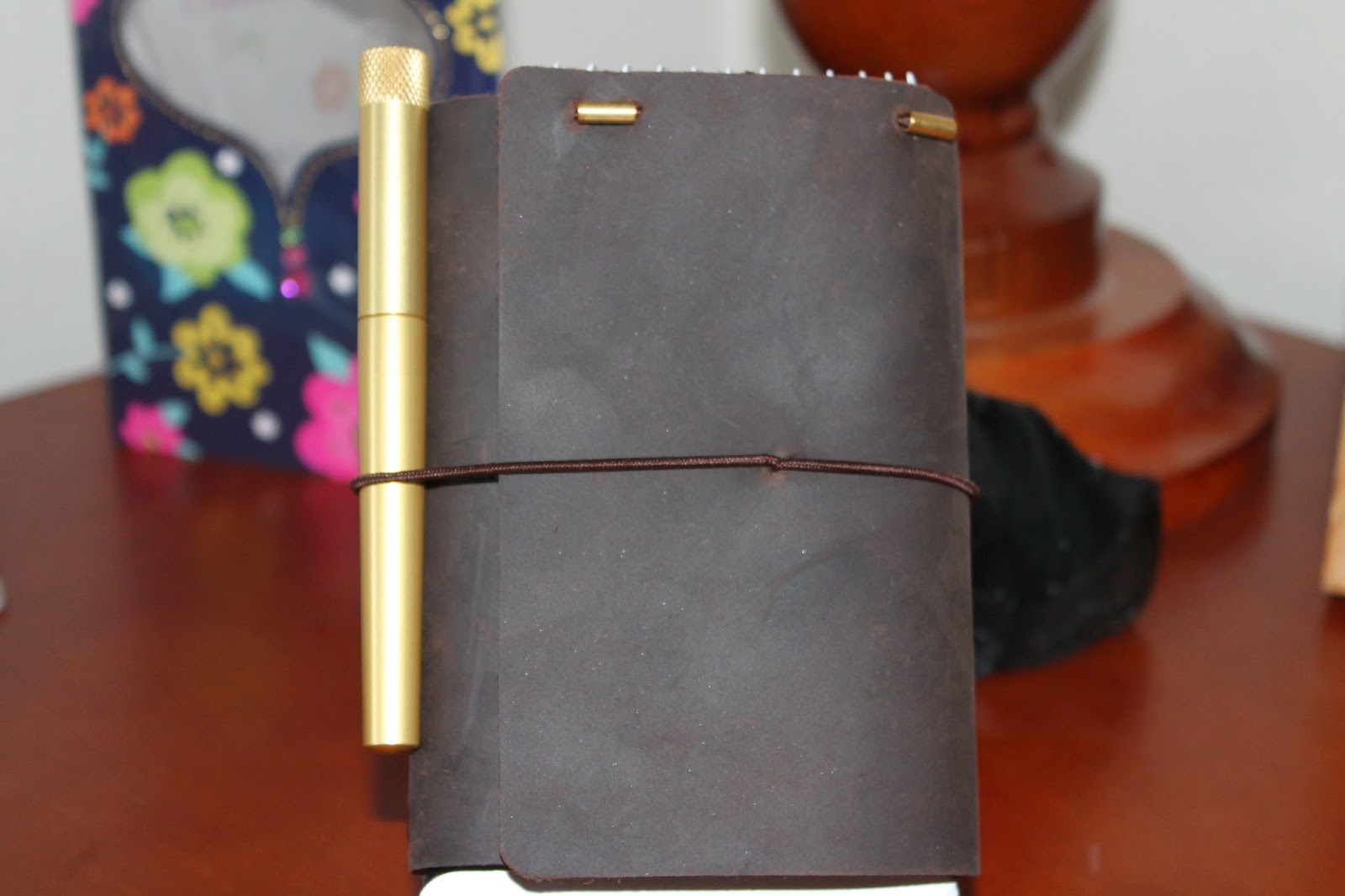 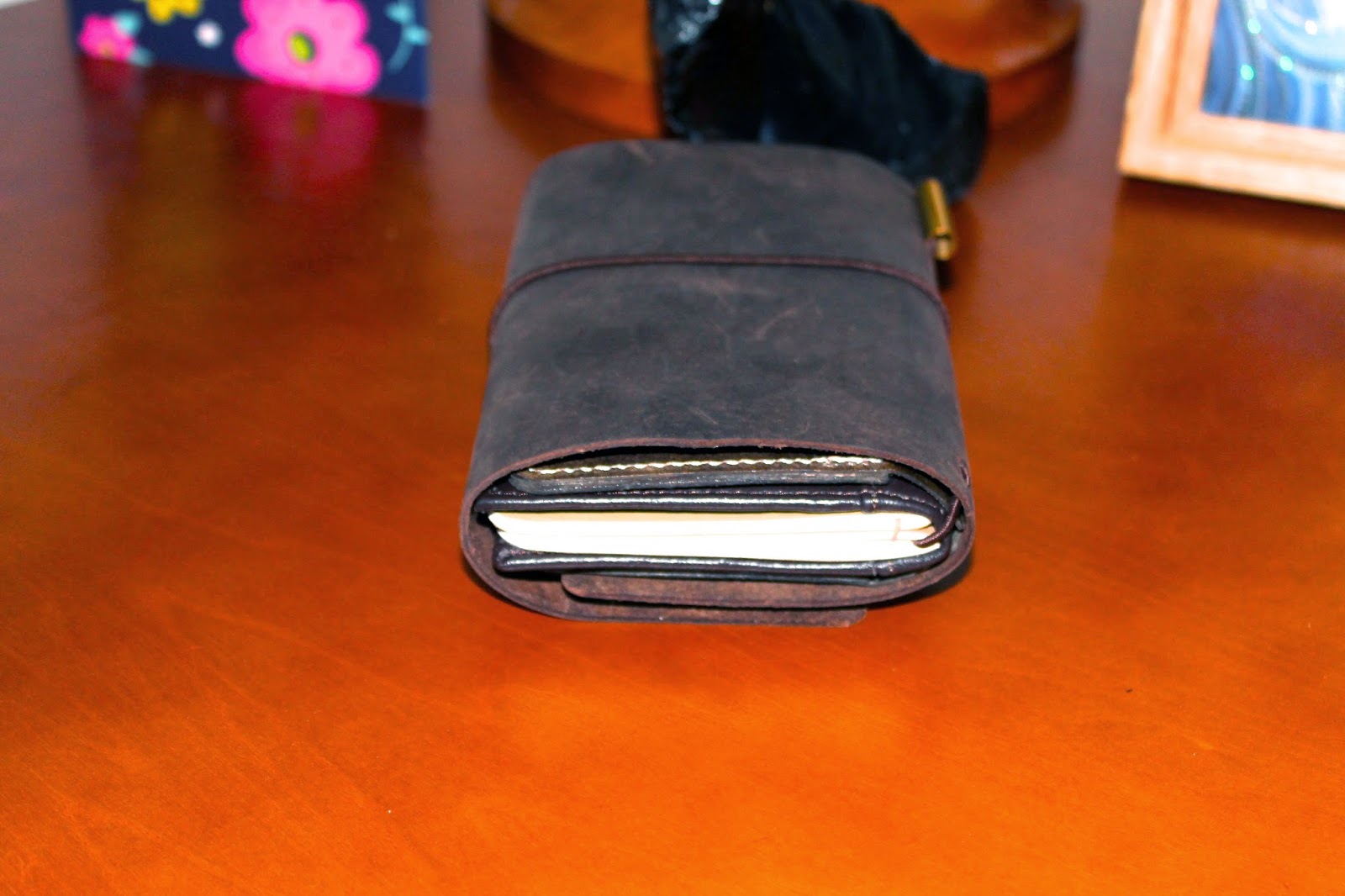 Posted by ZenKraft at 9:49 AM No comments:

I ordered a piece of brown pebble grain textured cowhide from Leather Unlimited, 2mm thick, in order to create Bomber Jacket style notebooks.  This one was my first finished prototype.  It was designed to hold eight inserts comfortably, for the "power notebook" user. 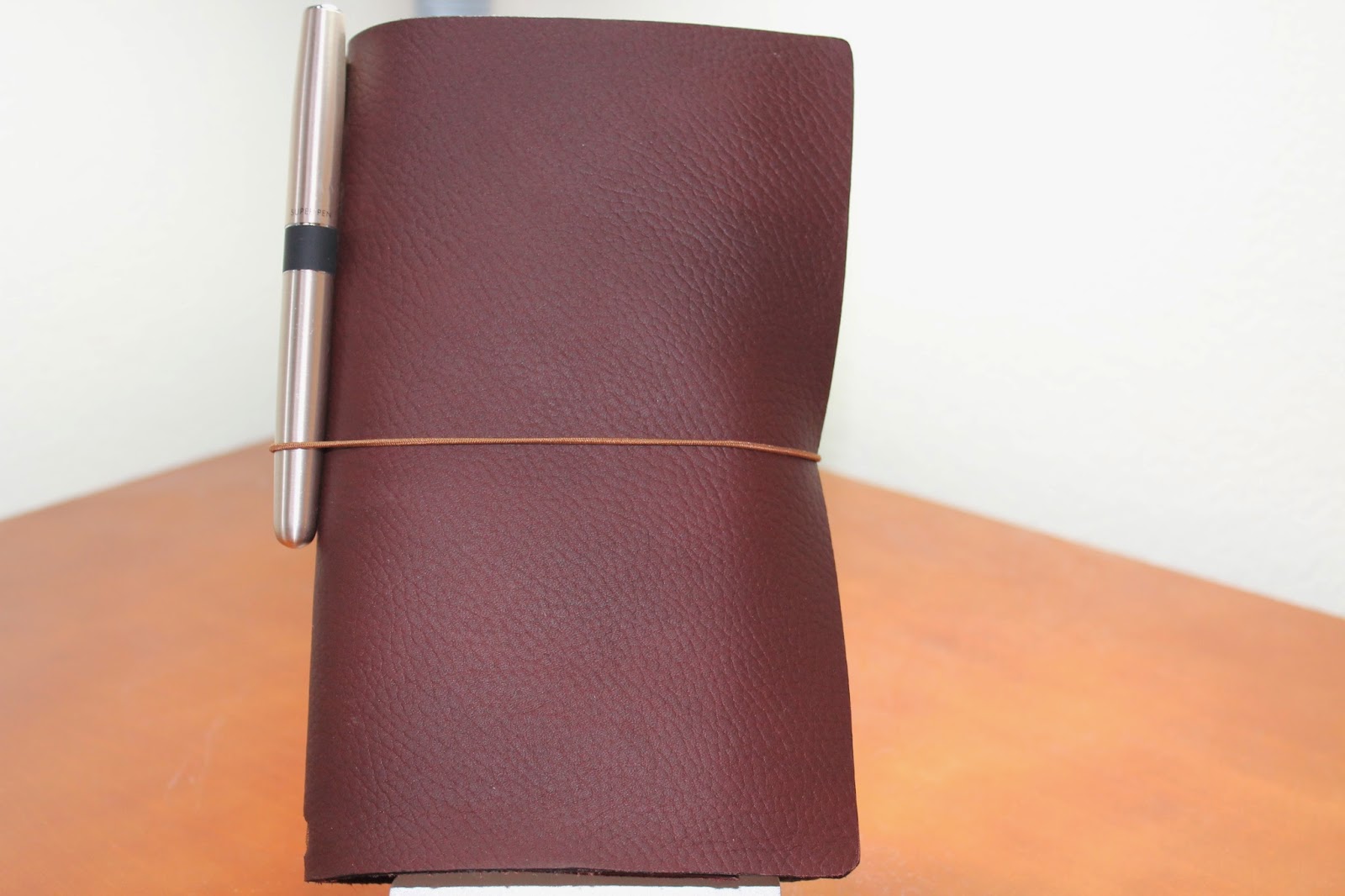 Here, it's loaded with five inserts, one of which is a leather zipper pouch made by Melissa Chao, "To Boldly Fold", Etsy.  https://www.etsy.com/shop/ToBoldlyFold?ref=ss_profile
I extended the Bomber Jacket's width in order to accommodate up to eight inserts, so with the five you see, it has a definite hangover which works for some, not for others. 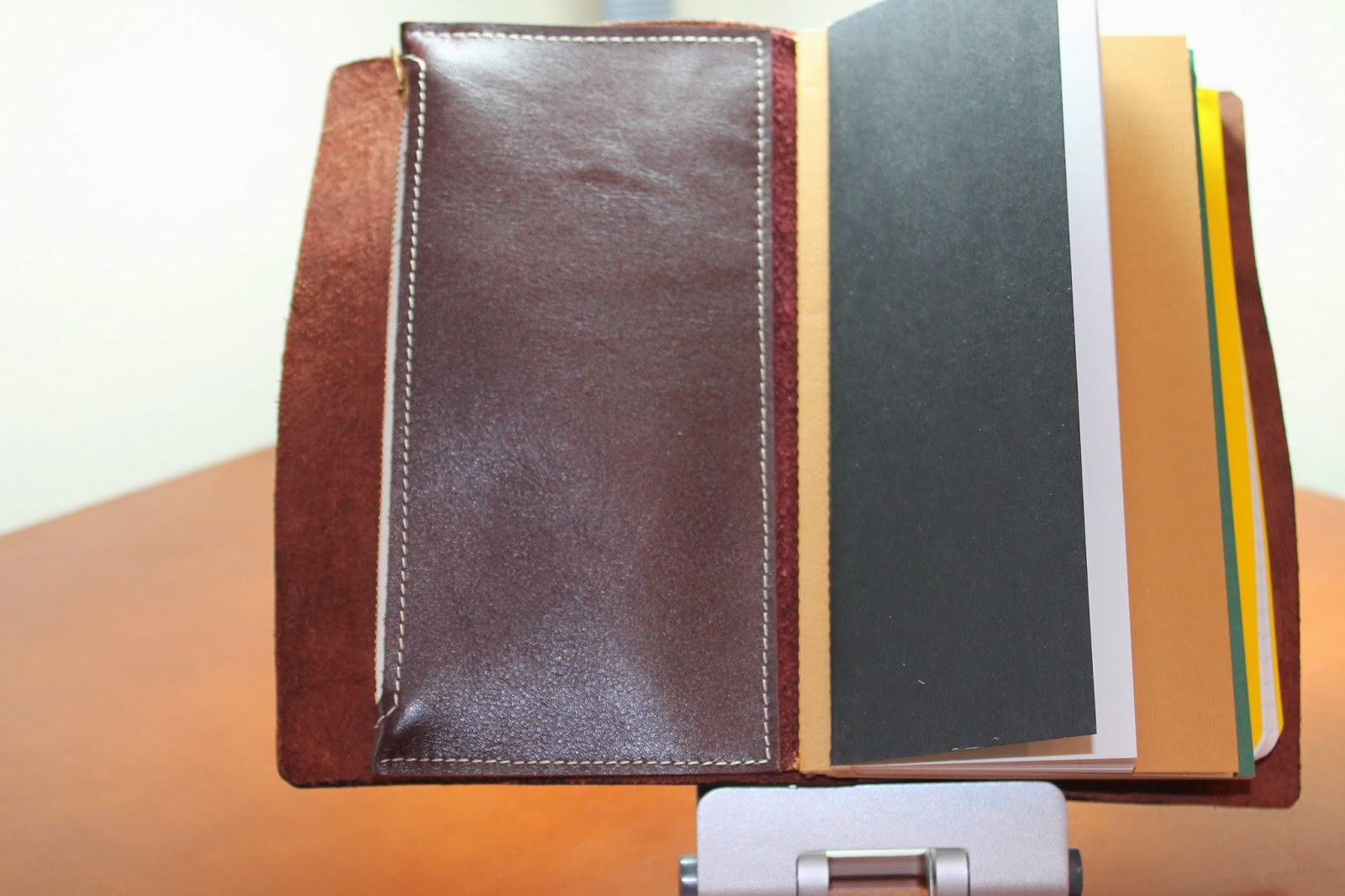 The first paper insert is a charcoal pocketbook insert by Banditappple.  It's slim for just jotting down notes and works well in the front position. 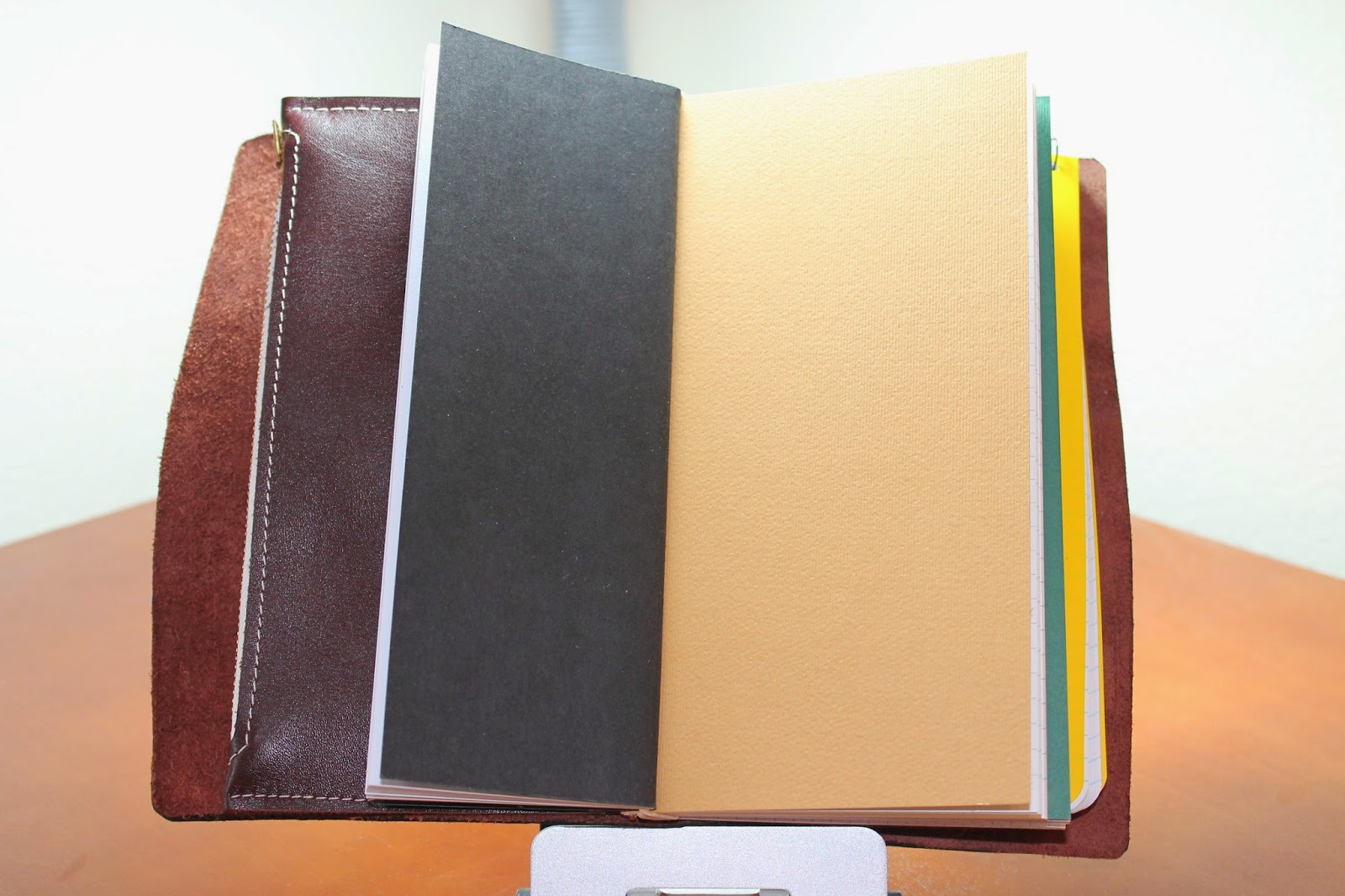 That's followed by two additional Banditapple inserts, of which I can't say enough about the quality of the materials, as well as the craftsmanship in hand stitching them together, thanks Arnie Kim! 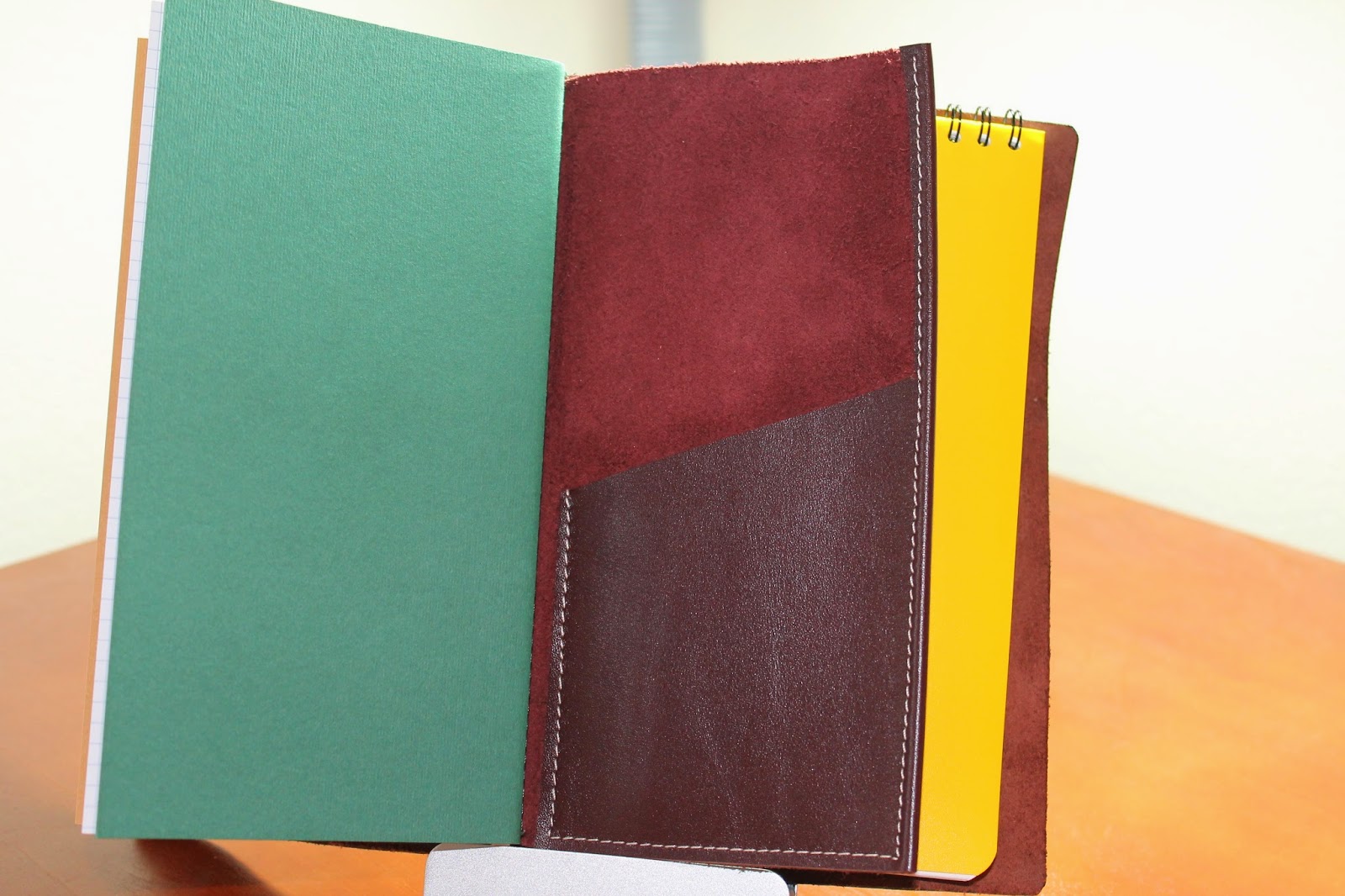 Here's a rear pic of the leather Zipper pouch, and here you see a side half pocket that Melissa added, nice touch! 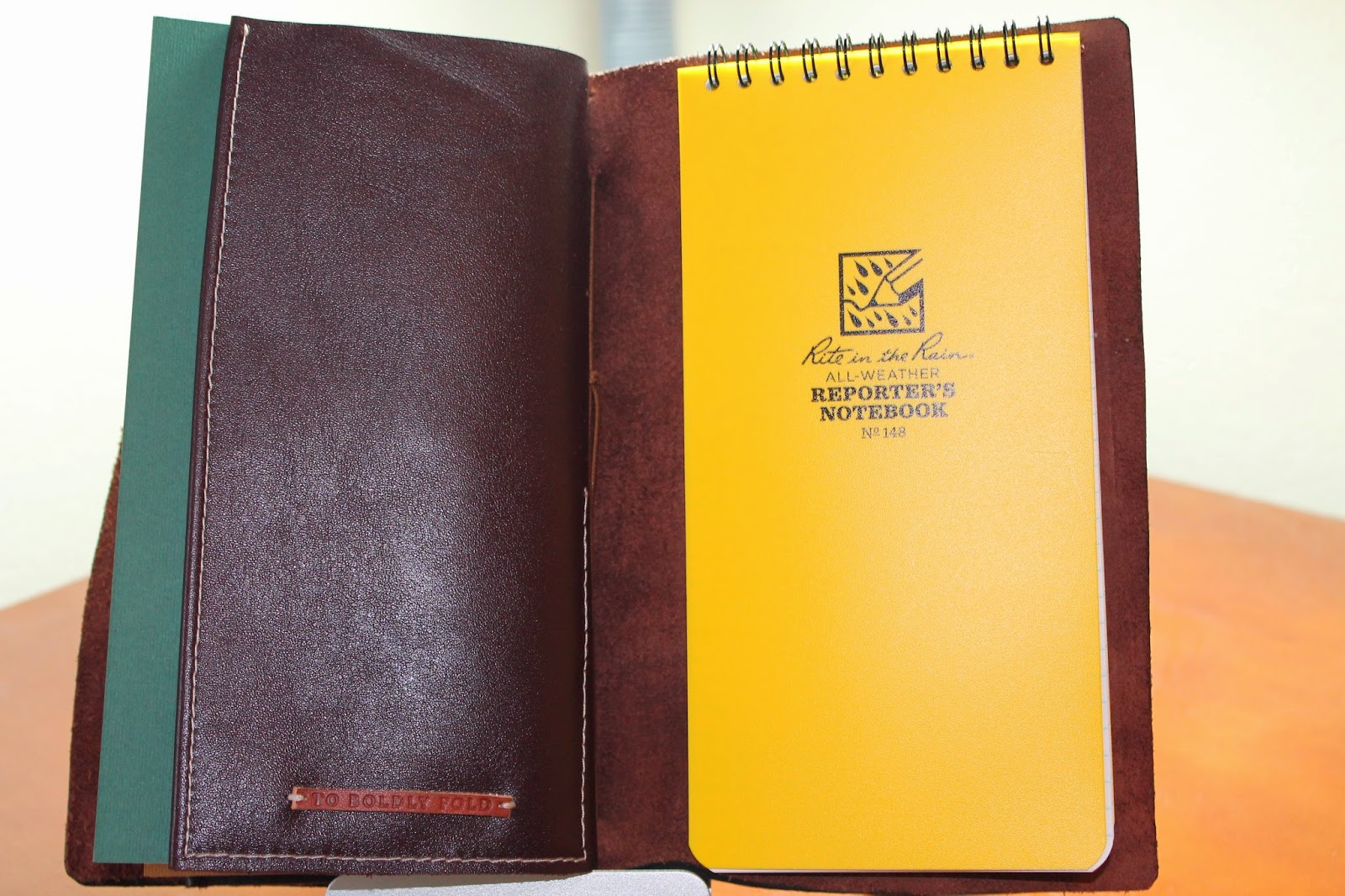 Coming up from the rear is something I had not seen before, but I wanted to explore the potential of a Reporter style notebook which would be incorporated inside and attached for easy use.  Hence the Rite in the Rain Reporter's Notebook which is attached by horizontal elastic cording to hold the notebook in place.  You'll see this theme again in other notebooks I created. 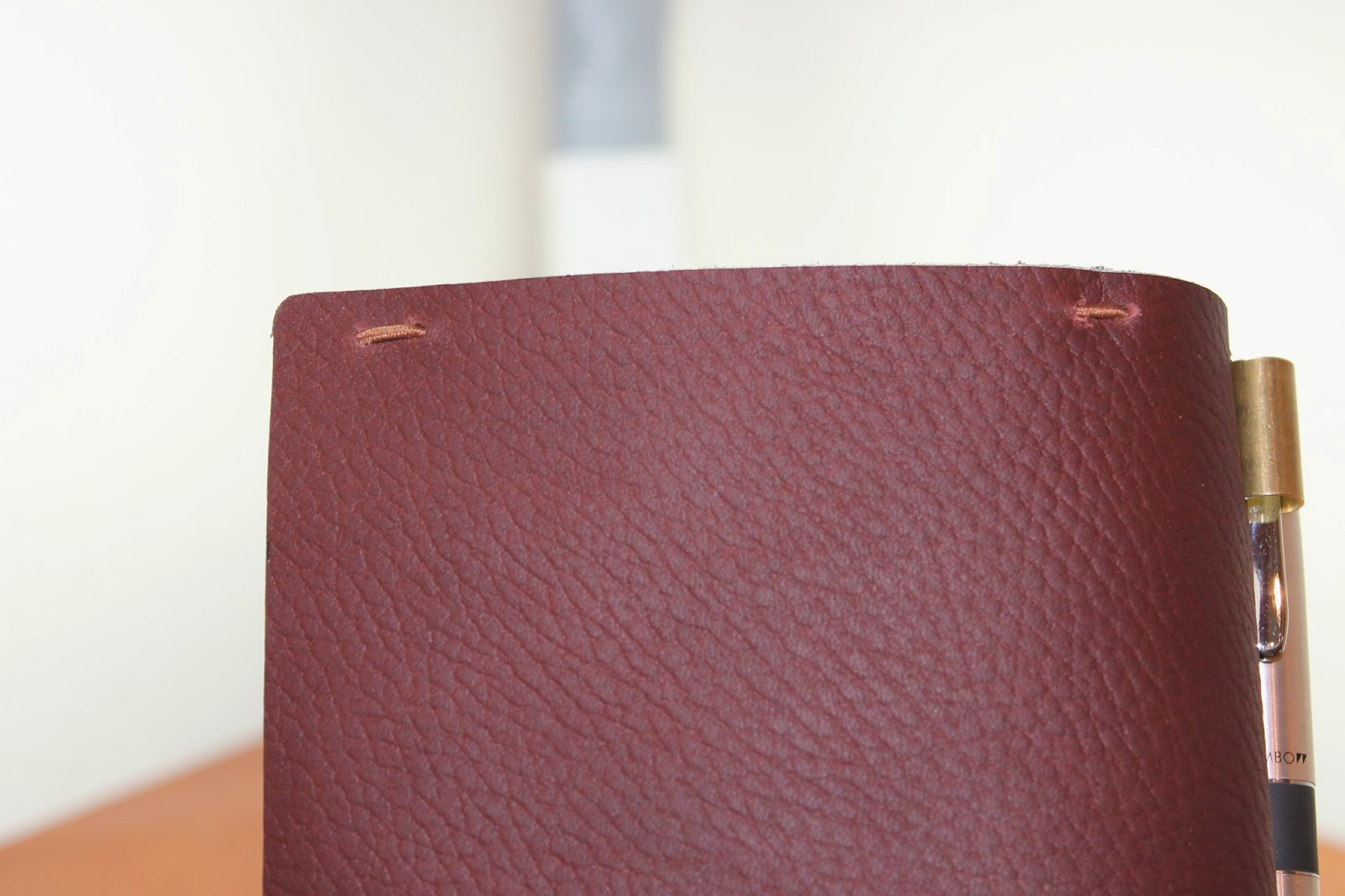 So, this is the ZenKraft Bomber Jacket Notebook, and it's going for $50.00 USD plus shipping.  I include three inserts, one of which will be a reporter style notebook, not a Rite in the Rain which is a little more spendy.  Contact me if interested: yehudahlightworker@gmail.com.
Thanks for looking.
Posted by ZenKraft at 6:17 AM 1 comment:

This was the beginning! September 2013.   My first attempt at making a leather notebook from scratch.  I did everything from cutting to dyeing to conditioning.  The leather is slightly thinner, 1.6mm thick, but it is a beautiful dark Bison brown, with 2mm dark brown elastic cord which is not knotted, but instead has a brass crimp clasp so as not to impede writing.  It's just a beautiful piece with a brass Steampunk gear charm in the middle. 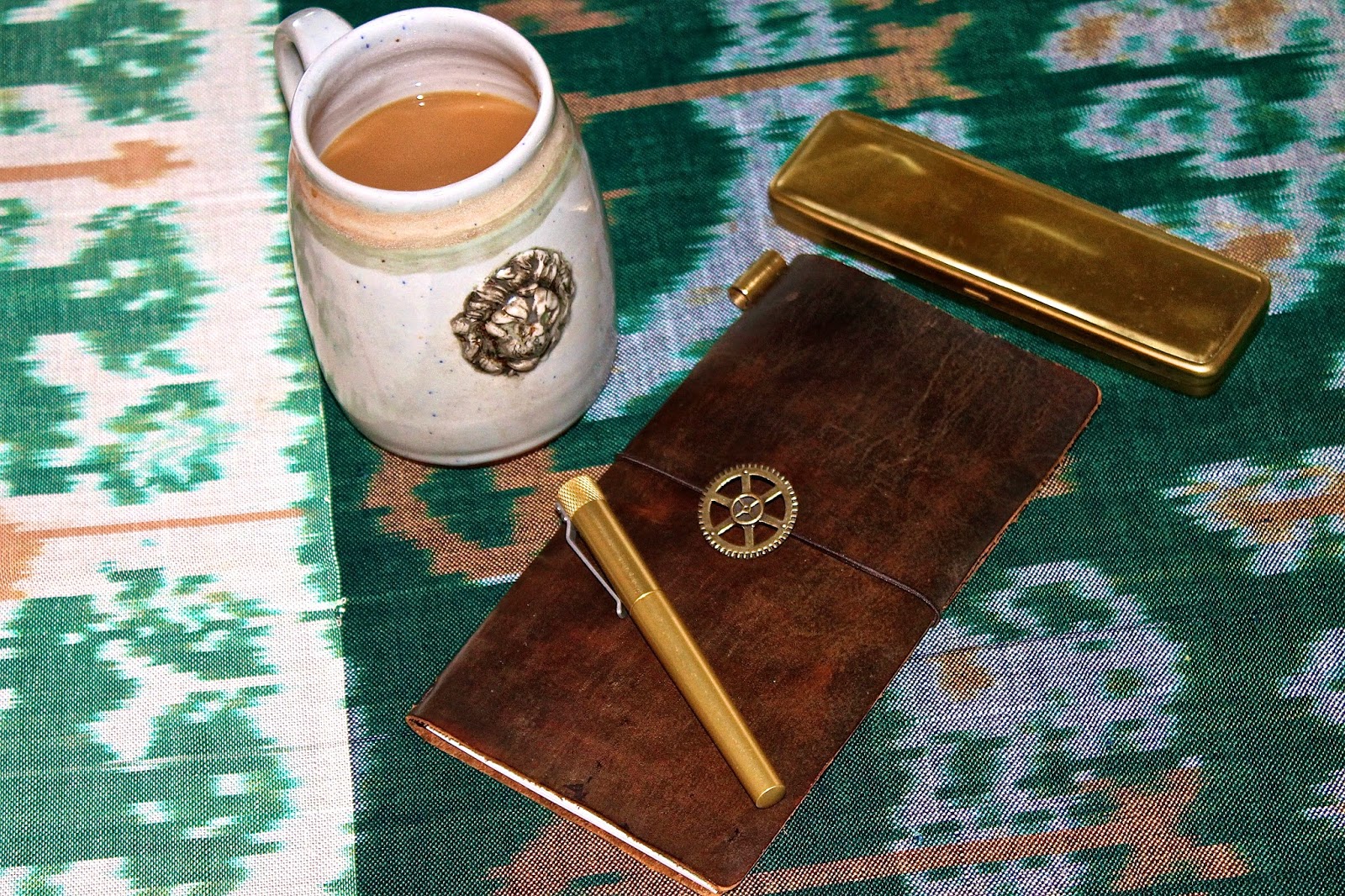 On the inside, I have a Banditapple lined insert which is made of very nice quality paper.  This piece is going for $21.00 plus shipping.  please email me at yehudahlightworker@gmail.com if interested.
I have more which are also going to be put on this blog and highlighted so stay tuned! 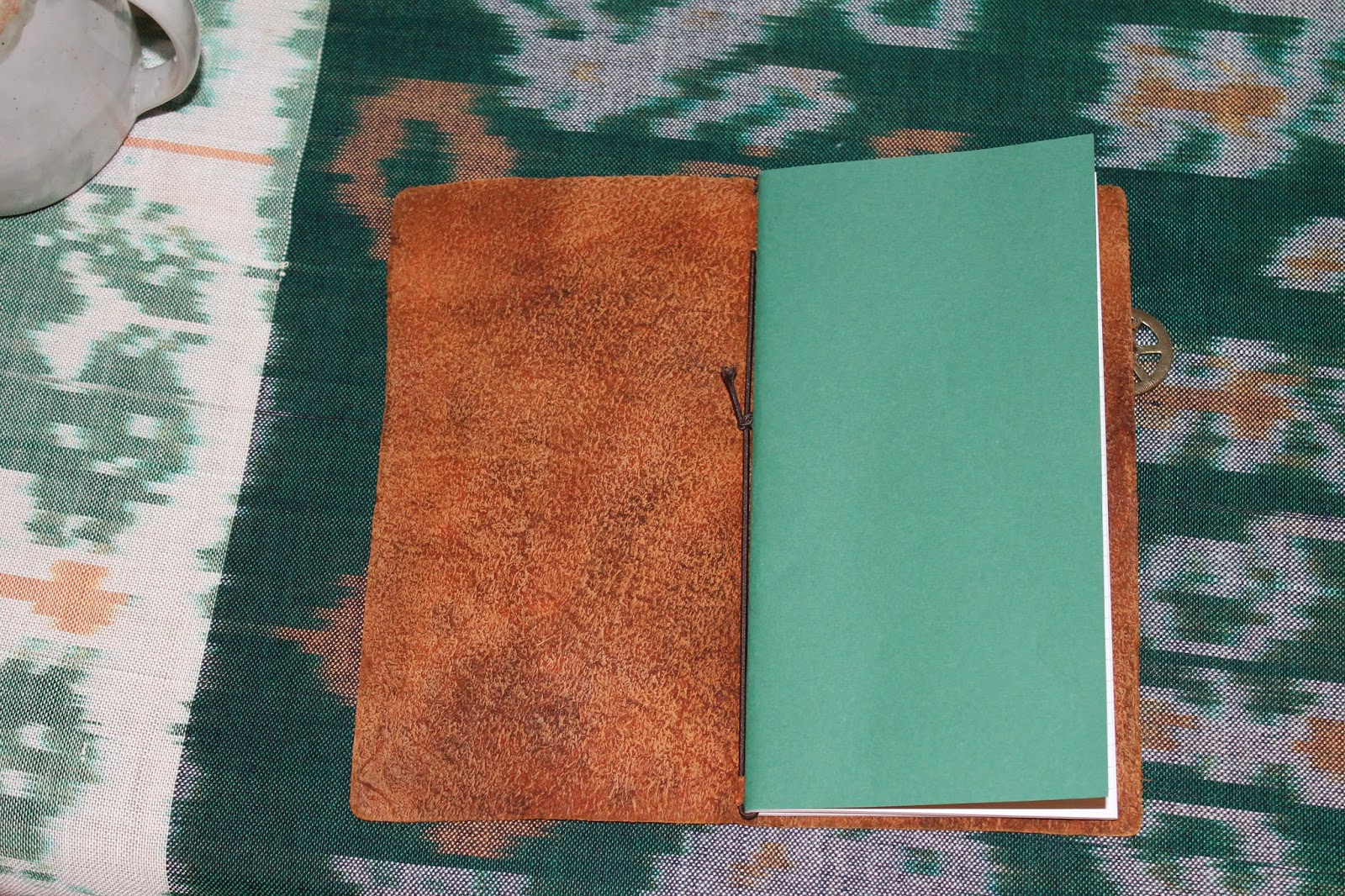 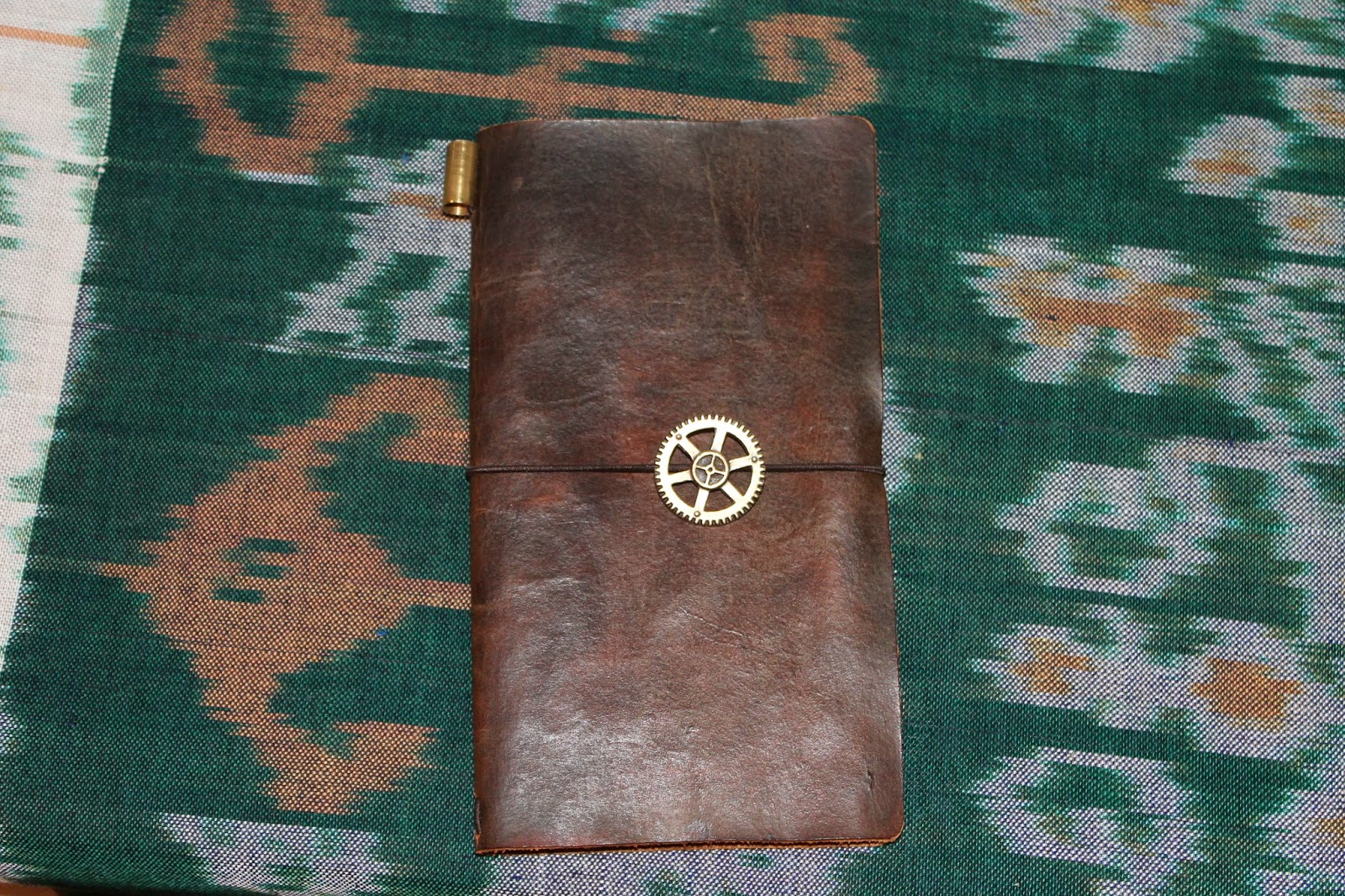 Posted by ZenKraft at 6:48 AM No comments:

So, I am starting this blog because of my affinity for both the writing experience and those tools used in documenting and immortalizing the memories the experience embodies.  The name "ZenKraft" has to do with the enlightened state of awareness which is translated in the creation of note taking tools that in design stem from basic materials, crafted into unique writing accessories.

I have only been making notebooks for nine months now, and everyday I learn a little more about the process and how designs can emerge out of different types of experiences.  So. I invite you to come and experience this creative process with me as I explore not only my creations, but those of others who also have an affinity for the written experience.

Posted by ZenKraft at 6:24 AM No comments: